Philadelphia's City Hall stands a modest 548ft including William Penn’s six-foot likeness in the heart Center City. It is the world’s second tallest masonry building behind the Mole Antonelliana in Turin by a mere 40 oz bottle. Beautiful and ornately decorated with limestone, granite, and marble, it was the tallest habitable building in the world from 1901 to 1908. It was the first secular building to have the record and the first building to have that record that could actually be lived in. It was surpassed during its construction by the Washington Monument and the Eiffel Tower respectively, which brings me to the point of all this architectural madness. You can judge a society by the extremes of its decadence. Before City Hall, all the tallest structures in the world were religious. Mostly European cathedrals and prior to that for 3,800 years the record was held by the Great Pyramid of Giza. 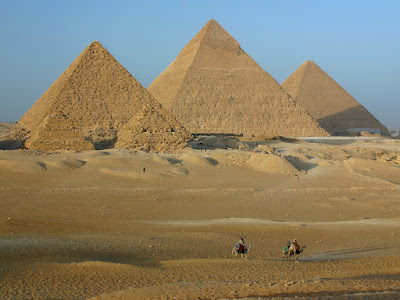 Religion once ruled the world, traditions passed down through generations, but by the turn of the century, it was government, reason, and progress. City Hall would remain the tallest building in the state of Pennsylvania until 1932 when the Gulf Tower in Pittsburgh overtook it, but, it remained the tallest building in the city of Philadelphia. Until the 1980s when the greatest cultural shift in mankind's tattered history happened in the blink of an eye. A fifty-year metamorphosis, a transmogrification if you will, leading us away from the greatest generation to its antithesis. The repressed militaristic 50s of Chesterfields, Sock Hops, and unadulterated imperialism amalgamated with the free love revolutionary cluster fuck of the 60s to train wreck into the Cirque Du Soleil on crack that was the 70s and finally crashing into the 80s. An equal and opposite reaction. The antithesis and the answer. Capitalism was our cure. Our renewed faith brought with it an end to the Cold War and the communal socially enlightened orgy of the left. What remained were a group of devious self-serving dregs known as the yuppies. Thus dawned the age of Wall Street. 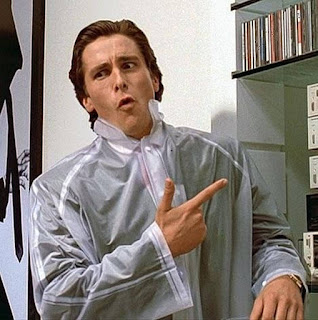 I'm not talking about the David Brooks Ben Franklin kind of yuppy, but the manipulative sociopathic Patrick Bateman kind. An era ruled by paper, suspenders, and cocaine, who ran our economy into the ground by the time most of you could get a job. I can’t say for sure that this was the straw that broke the camels back, but I’d bet a dollar on it. Housing bubble? Debt Crisis? Nervous lenders? All of these words are just words from the eternal Rolodex of catchphrases and Babylonian thesaurus of taglines. Scanning the pages of this vast infinitely expanding library of words I snap my fingers celebrating my epiphany: greed. That's what I was looking for! 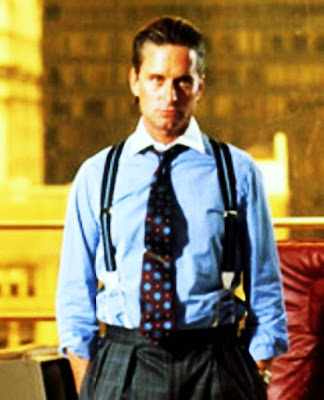 The building that overtook Penn’s illustrious monument to freedom, prosperity, and brotherhood is ironically named One Liberty Place, financed by Willard Rouse, nephew of developer James Rouse, who incidentally is Edward Norton’s grandfather. Off-topic, but interesting nonetheless. The construction of One Liberty Place was highly contested by architect and Father of Modern Philadelphia, Edmund Bacon, who was city planner at the time. Willard Rouse broke the longstanding “Gentlemen’s Agreement” in Philadelphia agreeing that no building would be taller than William Penn’s statue on City Hall. The New York Times ran an article saying Bacon did not attend the groundbreaking ceremony in 1985 saying, “I think it’s very, very destructive that he and he alone has chosen to destroy a historical tradition that set a very fine and disciplined for the city.” But he WAS at the ceremony. Why? Because he’s a gentleman. Not at the ceremony was Mayor Wilson Goode, who had his hands full with the deaths of five innocent children in Cobbs Creek at the hands of Philly PD. Goode was in support of the building even though the building plan was flawed leaving the future of Philly’s downtown unsure. One Liberty Plaza became home to Smith & Barneys, the financial hub of Philadelphia, and Starbucks. It remained the tallest building in Philadelphia for more than a decade until another generation would stake its claim. 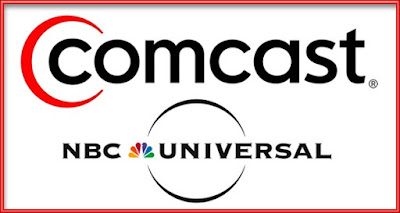 Okay never mind, I guess this is the straw I was talking about, this is when it happened. Comcast, the cable conglomerate, was now King. If there was a sarcastic font, I’d use it, surprising. It wasn’t anything new or groundbreaking, it was inevitable. Aldous Huxley was right and I didn't need a four hundred dollar history class to realize it. Quakers testify in front of God that they will live in opposition to gambling, capital punishment, and slavery. They also oppose time itself and seasons, oddly. They also oppose oaths. Counter-intuitive? I agree, but we digress. What Quakers do promote is more relevant: integrity, truth, temperance, moderation, sustainability, relief of suffering, penal reform, plain language, and peace. They had this idea that our pleasure would take over our world and we would become complacent in our comforts. 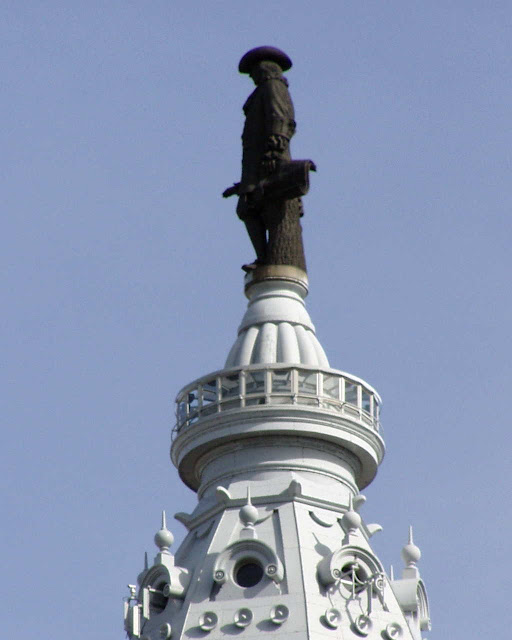 William Penn had high hopes for his new land. Religious freedom, inventive thinking, and a country whose wealth far exceeded her need were his goals.  The betterment of all, which includes the less fortunate. A bountiful harvest capable of feeding both native and newcomer. Whether he planned it or not, from the right angle, his statue looks like he’s taking a 10-1 all over his wondrous creation. Standing at the top of the tallest building in Philadelphia, the great founder is symbolically guilty of public urination.
It shall be unlawful for any person to urinate or defecate on any public right-of-way, underground platform or concourse, elevated passageways used by the public, railroad or railway passenger stations or platforms, or on the steps leading to any of them, or any private property used to accommodate the public, or on any private property without the permission of the owner. The penalty for violation of said law is subject to a fine of $300.
No comments:
Email ThisBlogThis!Share to TwitterShare to FacebookShare to Pinterest
Newer Posts Older Posts Home
Subscribe to: Posts (Atom)