Today I had off work I wanted to do some writing at the Philadelphia Free Library. I got a hoagie and a soda and walked to the fountain to sit down and eat. I sat and ate my lunch. I could see the Art Museum, home of the Rocky steps.  I looked around and noticed there were only a few others enjoying this spot. One was an older woman eating a bagged lunch. She had a sandwich in a plastic bag and a small juice box. After she was done eating she got up and left. A few minutes later a man came wondering, more like stumbling, into the park around the fountain. Judging by his disheveled appearance and dragging feet he had obviously seen some hard times. He walked to each separate trashcan placed around the fountain and looked inside. He didn’t find anything. Each time he searched one of the bins he came up empty and his demeanor dropped even lower. He staggered over to where I was sitting and I knew he was going to ask me for money. I thought about how much I hated people like this. They were everywhere in the city. They line the streets laying in gutters begging for change. They hound you and guilt you into giving them money. 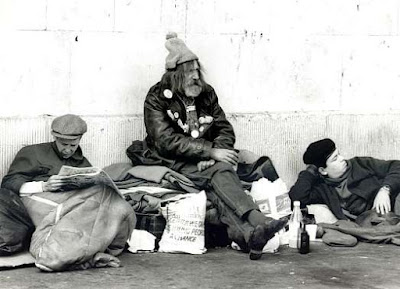 O how wrong I have been! As a kid, I hated asking my parents for money. I did it out of necessity. Or so I thought. I thought I needed things. If I didn’t have the money to pay for it, I’d beg my parents to get it for me. Most of the time, I’d end up losing whatever it was anyway. Then I got a sick feeling in my stomach. This man, these people, don’t ask for money because they want to, they do it because they have to. Could you imagine asking for money to eat, let alone beg for it? Imagine asking your parents for money to pay rent, for groceries, and then imagine asking a complete stranger. How low would you have to be? How desperate? To ask someone you don’t know to help you feed yourself. The shame of that concept, the embarrassment, made me put down my sandwich and prepare to hand it over to this man. I couldn’t imagine letting someone into my life like that. To let a stranger know that, “Hey, I’m broke and can’t even pay for food, can you help me.” Think about the information that comes with that admission. Divulging intimately personal secrets that most of us would guard against our lives. Think about the assumptions that come with that knowledge; probable drug addiction, degradation, zero home life, no family, no friends, no hope. These people are alone. And there are a lot of them. As he approached I put my hands in my pockets, in a preemptive motion to empty my pockets. I didn’t have that much on me, but I was willing to part with the rest of it, my BBQ chips, and the end of my sandwich. Then the unthinkable happened. 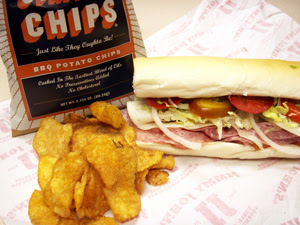 He walked right past me. He walked over to the bench recently vacated by the woman with the juice box. In the exact spot, she was sitting there was a tiny pyramid of plastic juice and snack boxes and a sandwich. The man picked up the sandwich and pocketed two of the boxes. Leaving one apple juice. He unwrapped the sandwich and tossed the bag on the ground. The woman had left food, without any knowledge that a mere minute and a half later, a man would come along and she would have satisfied his painful hunger. Maybe she did know. Either way, she had done something selfless. No thank you, no pat on the back, and no tax return. We often do things because we want people to know we did them. I don't know who this woman was, but she should be canonized.

Doing something without an ulterior motive, without the possibility of recognition, without a reward, is what it's all about.